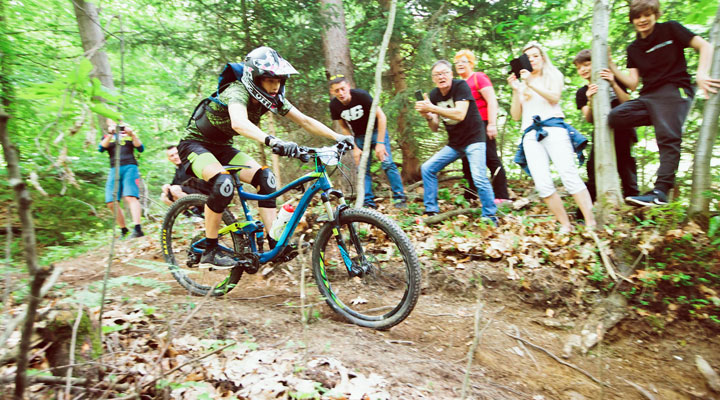 Saturday’s second edition of Poseka FunEnduro in Bike park Poseka which was opened in Ravne na Koroškem, Slovenia a year ago was the fifth SloEnduro 4Fun event of the season.

Saturday’s second edition of Poseka FunEnduro in Bike park Poseka which was opened in Ravne na Koroškem, Slovenia a year ago was the fifth SloEnduro 4Fun event of the season.

67 riders from Austria, Croatia and Italy put on their number plates for the occassion. The younger categories and women were also well represented.

The organizers from ZKŠTM Ravne na Koroškem and Ravne cycling club prepared both park runs for the race, the Šnel Pepi and the Enduro Bavči. Participants did two timed runs on each. Along with one morning training run on each of the trails the elevation total of the day got close to 1000 meters. The U15 category only did one timed run on each track.

Four-time SloEnduro champion Vid Peršak (Orbea Enduro Team) was of course the main favourite. He rarely takes part in 4Fun races but a home race is special. He was fastest in all four runs and with the total of 8 minutes, 39 seconds and 34 hundred he was 21 second faster than second placed Austrian Max Fejer (Team Dorrong). Slovenian Nejc Huth (Energijateam.com) finished third 32 seconds behind the winner.

Tine Štriker (KK Ravne) was the fastest U15 riders on half course in front of Nal Raško in second and teammate Nace Koseljnik in third.

Regarding May’s monsoon weather the conditions in Poseka park were great and the trails were dry. The atmosphere was also great all day long.

After Poseka FunEnduro the second half of SloEnduro 4Fun series season is starting. Next event is Krivapete Enduro on July 7 in San Leonardo (Udine, Italy). But before that not far from Ravne this year’s Black Hole Enduro will hit on June 22/23 with a double role this time-as second round of SloEnduro and third of EWS European series.