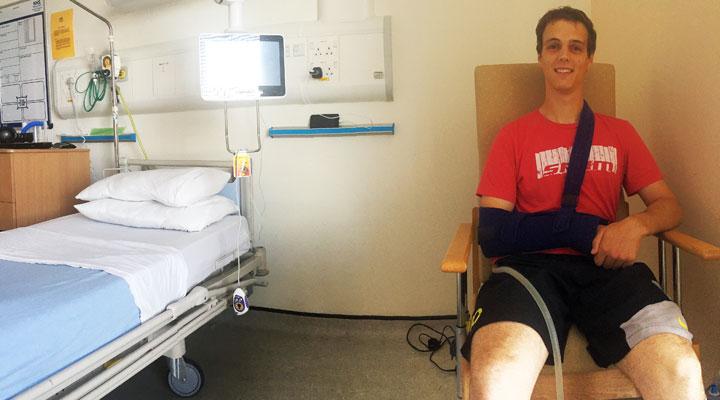 Injuries of two time Slovenian DH champion proved to be a bit more serious but he may be released from Glasgow hospital on Thursday.

Injuries of two time Slovenian DH champion Žiga Pandur, member of Unior Tools Team, who crashed in Friday’s training for World Cup downhill race in Fort William, Scotland, proved to be a bit more serious: But Žiga may be released from Glasgow hospital on Thursday.

Broken ribs and scapula and a bruised lung, this was the first diagnosis that kept Žiga in local hospital overnight. Then one of his lung collapsed and he was moved to a hospital in Glasgow when he had his lung drained of blood.

“I have been breathing on only one lung for a while so I was receiving additional oxygen with a mask, now I’m able to breathe without it,” said Žiga who is now feeling better.

But he can’t fly so will be coming on land with team manager Grega Stopar.

Scottish doctors have just been dealing with his lubg so there is little clear about his other injuries. “I have a strange feeling in my shoulder, it could be a ligament problem,” says Žiga who really can’t have an idea at this point when he will be able to get back on his bike.

It is the first season threatening injury in the career of the 25 year old who has so far only suffered minor injuries and concussions. Žiga was national downhill champion in 2012 and 2013 and has best Slovenian men’s elite World Cup and World Championships results with 24th and 25th respectively.

Team director Tine Mahkovec remains positive: “It is Žiga seventh World Cup season and Leogang this weekend will be the first race he will miss due to an injury,”