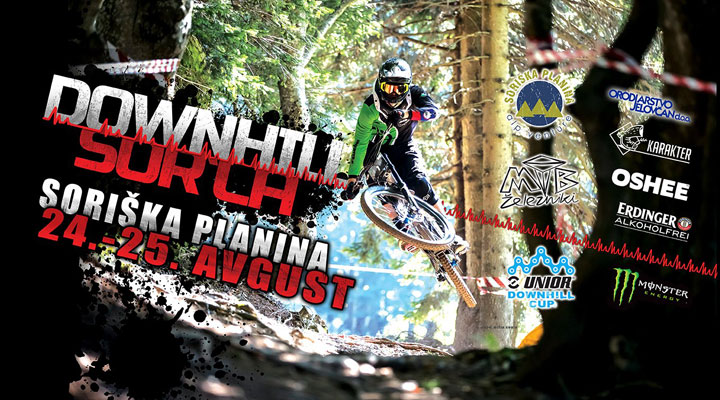 Best event of 2016 returns to the series calendar. In absence of national team riders, the battle for the top is wide open.

It was one of the best off-season news: the downhill race at Soriška planina, voted the best of 2016, returns to the Unior DH Cup calendar after one year hiatus. Now 2019 Downhill Sorica is just days away. Round four, the last before final, is coming up this weekend, August 24/25.

The organizers from Soriška planina resort and Železniki MTB club are preparing the 1650m / 280m drop track from top of Lajnar. It is a bit changed in the bottom part from 2017 due to some ski slope improvements.

Jure Žabjek (Unior/Devinci Factory Racing) won all the semi-final (seeding) and final runs at all three stops so far and is sitting high above everyone else on top of the men’s elite ranking. Rudi Pintar (Sinter Brakes Team) is second and Luka Berginc (KK Črn trn) third. Pintar is a Sorica local while Berginc who missed round 1 at Lošinj due to injury is now in top form, just confirmed by a win in iXS European DH Cup. Berginc also won at Sorica in 2016 and 2017. It’s not like Žabjek would have a super easy job this weekend is he turned up but without him at the start the battle for the top is wide open.

Registration is open until Thursday.

On Saturday training takes place from 10am to 5pm. On Sunday the seeding run starts at noon and the final run a 2.30pm.

The organizers are staying true to their tradition: a live concert starts at 6pm on Saturday.

Video THU: He believed he could fly