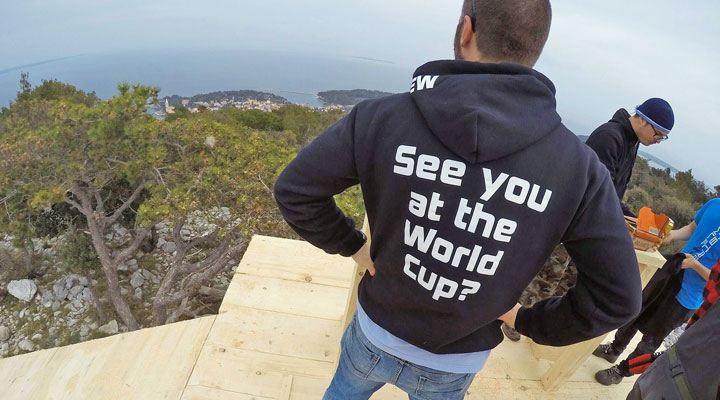 From the start ramp to two consecutive jumps and towards a while bunch of new features and sections in the bottom part of the World Cup track to be. Unior DH Cup starting on the island in a month.

The construction team of Downhill Lošinj has lately spent a number of extended weekend on the track which will host the opening race of the 2018 World Cup. In exactly a month the track will be tested in the inaugural race of the Unior Downhill Cup.

By now we all know that the track is 1.7km long with 256m of elevation drop. Okay, make that 255 because the port pier which doubles as the finish area is 1m above the sea level.

And that it’s rocky with no soft crash spots, surrounded with thick vegetation with thorns.

All these facts remain, however if a rider descended down the track last year or even the year before, he will not be feeling at home on it this year. There is a number of new sections and features waiting for the downhillers.

Event director Sebastjan Zmrzljak went through the changes on the track for us. To start with they erected a new 4 meter start ramp. At the end of the finish straight there are two new consecutive jumps called “Vegan Sauna”. This section then joins into the “Veganizmmm” which was introduced last year. What’s with the vegan names? It might just be a sign of personal growth of the builders who used to name the sections of their home track DH Javor after meat and metal musicians…

Vegan Sauna, part two – too much for national bunch?

“There are many new things at the bottom of the track, it’s completely changed,” says Sebastjan. A new attractive section continues into the Podjavori forest park across the “Sissy Gap” over an old Habsburg age wall. They had to clear lots of bush there to make the track visible and accessible by spectators.

Sissy gap – could be an attractive underpass for spectators 🙂

Before entering the street section (which is also a bit changed with more turns) there is a new wall jump. It has not been finished at the time the above video was shot so Jan and Jernej avoided it.

And there are some rocks…